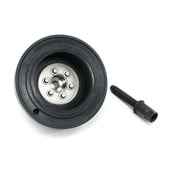 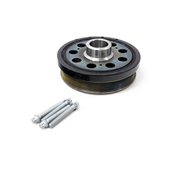 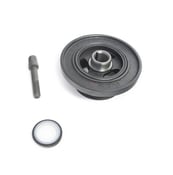 Locks your N54 engine's center crank hub bolt in place to ensure it cannot loosen and also includes the crankshaft seal guard to prevent
1 Series M, 135i, 335i, 335i xDrive, 335is, & more

Just as a cracked BMW engine block can permit engine oil to blend with circulating antifreeze, the opposite situation can also arise: antifreeze can blend with circulating engine oil. This type of a condition only occurs when an engine block has a stark enough or deep enough crack that permits the antifreeze to get into the engine oil passageways. Generally, antifreeze-contaminated oil yields an unusual smell or smoke coming from your BMW’s exhaust pipe, or cloudy, milky-colored oil that can be seen on the engine dipstick during a routine oil examination. Numerous times, a regular vehicle engine examination will uncover a cracked engine block. If an engine is sterile enough and free from excess grime, a visual engine examination, which is frequently done during a regular engine tune-up or engine service, can spot engine block cracks that are intense enough to cause fracturing of the engine block casing material. Typically, large engine block cracks can bring about some easily spotted engine mechanical warning signs, but in occasional cases where no engine mechanical signs are created, large engine block cracks can be seen during routine engine maintenance. FCP Euro's methodical and clever call center staff is nearby and ready to answer any questions you have or support you may need. If you are undecided about which engine block and component part is required for your BMW, FCP has an enormous line up for the BMW brand. Check out the FCP Euro website for all parts, as well as our updated inventory. If you have questions, would like to put in a phone order, or just have feedback, do not waver in giving FCP Euro a call at 1-860-388-9001 to connect with our service friendly team.