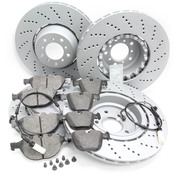 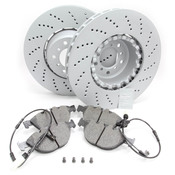 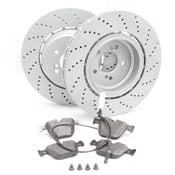 The BMW M5 is a high performance version of the standard 5-series and is built and designed by the Motorsport division of BMW also known an M GmbH. The M5 is the worlds first super sedan and is the bench mark for every car to compete against. The M5 combines practicality and high performance in a stylish package and is a highly sought after car for all enthusiasts. The M5 is easily recognizable from its 5-series counterparts by more aggressive body styling and bespoke interiors. The M5 also receives bespoke engines and interior that make it a complete separate car from the regularly produces 5-series.

E28 M5 (1988) was only available in one model year in the United States and was a limited production car with only 2191 units built between 1985 and 1988 making it one of the lowest production cars from BMW ever. The M5 made its first official debut at the Amsterdam Motor Show in February of 1984 and when introduced to the market was the worlds most powerful and fastest sedan. The introduction of the M5 created a segment of cars that had never existed before and remains the inspiration for all other high performance sedans on the market to this day. The E28 M5 blended high performance motoring with practicality. It was powered by a S38B35 which was a derivative of the legendary M88 engine used to power the M1.

E39 M5 (2000-2003) is a car that was almost never produced until other auto makers introduced M5 killers to the market place. No to be outdone, BMW gave the E39 M5 a serious horsepower bump over the previous 2 generations of the M5. Powered by the venerable S62B50, a highly modified version of the M62 V8, the E39 M5 was able to accelerate from 0-60 in 4.8 seconds and has a de-restricted top speed of 186MPH. The S62 is connected to the rear wheels via a 6 speed manual transmission. BMW M also made numerous modifications to the suspension to improve the handling of the E39. The E39 chassis also features a flexible electronics design that allows for equipment upgrades and features to be added as needed. 20,482 examples of the E39 M5 were produced between 1998 and 2003.

E60 M5 (2006-2010) was produced between 2005 and July of 2010 with 19,564 sedan models and 1,025 wagon models produced. The E60 M5 is powered by the S85B50 V10 engine which links the M5 to BMWs Formula 1 program. The E60 M5s drivetrain was designed 100% from scratch including the SMGIII 7-speed transmission capable of 63 millisecond shifts. In North America BMW released a traditional 6 speed manual option leaving the 7 speed SMG standard equipment. The E60 M5 is capable of a 0-60 time of 4.4 seconds with an unlimited top speed of 204MPH. The E60 M5 is considered the most successful M5 ever produces. In Europe BMW introduced an E61 M5 Touring model but never introduced it to the North American market.

F10 M5 (2013 to present) started production in 2011 and is the first M5 powered by a turbo charged and direct injected engine. The S63B44T0 is a modified version of the N63B44 engine found in other BMW models. It features a 10:1 compression ratio along with Valvetronic variable valve lift. It also has 1.5 bar of boos pressure which allows the S63B44T0 to produce 550 horsepower and 500 lb ft of torque. This rockets the F10 M5 to 60 MPH in less than 4 seconds while also having a 31% improvement in fuel economy over the E60 M5. The rear differential of the F10 M5 features an electronically controlled variable lock, also known as Active M-Differential) which allows the M5 to put down the most power possible under all circumstances.

Here at FCP Euro it is our goal to help you keep magnificent vehicles such as the M5 on the road for many years to come. BMW M5 parts are of the highest quality and engineered to endure a lot, but even a machine as serious as the M5 requires maintenance and repairs from time to time. Whether you need basic preventative maintenance parts and filters, parts for complex engine and suspension repair, or upgrades, we've got you covered for all your BMW M5 parts needs. Be sure to check out our ever growing BMW M5 catalog which also includes many M5 original parts to ensure that your vehicle operates as smoothly as it was intended when built. The M5 is truly an automotive icon that will be remembered for a long time. All of our BMW parts are backed by the FCP Euro quality and fitment guarantee, as well as a one year warranty that you can trust, so your M5 can be admired for years to come.