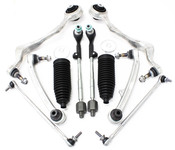 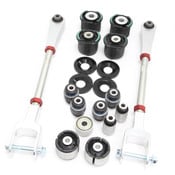 The BMW M3 is one of the most beloved cars BMW has ever produced. Both new and used M3s are always in high demand by consumers and are simply one of the most fantastic driving machines on the road today. The original M3 was first built in 1988 as a road going homologation special so that BMW could use to enter road racing competition. Under homologation rules BMW had to make adaptations to the vehicle regularly to keep in compliant. This produced special versions of an already special car. Since then, the M3 went to go on to be a dominant race car while being a highly sought after and respected road car.

Generations of the M3

E30 M3 (1988-1991) was powered by an S14 2.3 liter inline 4. A special version of the E30 M3 called the EVO 2 received a 2.5 liter version of the S14 power plant which generated more horsepower. There was only limited number of EVO 2 M3s produced which means those vehicles today are highly sought after. The E30 M3 to this day is still a highly popular M3 model by both enthusiasts and car lovers in general. The E30 M3 was primarily available in coupe models with a small number of convertible examples produced.

E46 M3 (2001-2006) is the third generation of the M3. This M3 was a departure from the understated E30 M3 and E36 M3. Featuring a noticeable hood bulge, large fender flares, and a much wider stance, the E46 M3 has a presence that defines it from the standard E36 M3 models. The E46 M3 also received the S54B32 engine which featured an undersquare engine design, individual throttle bodies, and an 8000 RPM redline. The S54 engine produces 333 horsepower in US markets and 344 in European markets. Along with a more powerful engine the E46 M3 also received interior upgrades and bespoke paint options. The E46 M3 is considered to be the most attractive M car by enthusiasts. The E46 M3 was only available in coupe and convertible models. Europe also received a special version of the E46 M3 called the CSL which featured many bespoke mechanical and styling pieces. The US market received a competition package vehicle which received some pieces of the CSL including brakes, wheels, and steering rack.

E90 E92 E93 M3 (2008-2013) is the fourth generation M3 and is the only full production m3 to be powered by a V8. The S65B40 engine is derived from the V10 found in the E60 M5 and E63/E64 M6. Featuring a 4 liter displacement, individual throttle bodies, and an 8400 RPM redline. The S65 V8 outputs 414 horsepower and 295 lb ft of torque. The E9X M3 also features significant interior enhancements over the three previous generations of the M3 with an advanced multi-link front and rear suspension. The E9X m3 was available in sedan models (2008-2011), coupe models (2008-2013), and convertible models (2008-2013). All body types also received an LCI update featuring improved exterior lighting and interior electronics. European markets received a special edition M3 called the GTS while various other special editions cars were produced for specific markets.

F80 M3 (2015 and up) is a completely new breed of M car. For the first time the M3 from the factory is powered by a direct injected turbocharged engine. The S55B30 engine features a closed deck design, direct fuel injection, dry sump lubrication system and produces 425 horsepower and 406 lb ft of torque. Along with massive weight savings the F80 M3 is the fasted M3 ever produced in almost every aspect. The F80 M3 also receives special interior and exterior cosmetics greatly differentiating if from the F30 3-series. The F80 M3 also received multi piston fixed brake calipers along with an expensive carbon ceramic brake option. The F80 M3 is only available in Sedan models while coupe models are called the M4.

FCP Euro carries a wide array of parts for all generations of the M3. As enthusiasts we know that its critical to have a ready supply of replacement parts to keep these amazing vehicles well maintained and reliable for years to come. M3s are high performance cars which are most noted for their suspension. Control arms, bushings, ball joints, shock absorbers, and other related parts are critical in the handling of your M3. FCP Euro also carries an array of performance parts for your M3 like exhaust systems, coilovers, shocks, and lowering springs. FCP Euro also carries a wide array of braking parts in both Genuine and aftermarket brands. Brakes are critical to stopping your M3 from high speeds. FCP Euro only carries the best brands of brake parts for your M3. In addition to brake parts FCP Euro also has a full collection of Genuine replacement parts that can be accessed by part number or name via our web site search. If your M3 needs anything you can be assured that FCP Euro can likely get the part you need.