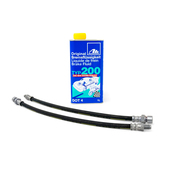 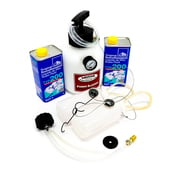 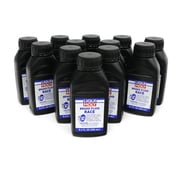 The ultimate tire and wheel cleaning kit with tire dressing

A useful kit to get any vehicle ready for winter driving

In the 1950s the post-war quality of life was improving greatly. Volkswagen was known for producing its type 1 Beetle as an economy car, but there was now more of a demand for a higher class of vehicle. Karmann, the German coachbuilder, was contracted to make this new car idea a reality. Karmann in turn contracted Ghia, an Italian company that had previously worked with Chrysler and Studebaker, to help style the body of the vehicle. Much of the car was hand built for quality which caused the car to be noticeably more expensive than the Beetle. Introduced in 1955, the Karmann Ghia quickly made its way overseas and became the most commonly imported automobile to the United States over the next few years, and was produced until 1974. The Karmann Ghia was a two door 2+2 coupe that combined a new sporty looking stylish body work with the proven engine of the Beetles engine. In 1957 a convertible model was released alongside the coupe. Throughout the 1960s a few redesigned models were made available, although they remained mechanically similar to each other and remained as a stylish luxury car rather than an actual sports car.

The Volkswagen Karmann Ghia has not been produced in many years and they are becoming rarer every year. It is usually hard to find parts for collector cars for that exact reason, but here at FCP Euro were proud to offer you a large selection of quality Karmann Ghia parts to help you get the job done. From maintenance parts that keep it running smooth to parts for performing mechanical repairs, weve got the stuff you need in our Volkswagen Karmann Ghia catalog to make sure you can enjoy your classic Volkswagen for many future years to come. As with all of FCPs parts, all of our VW parts are backed by our quality and fitment guarantee as well as a one year warranty.