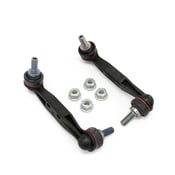 The BMW 228i xDrive is the successor to the outgoing 1-series and is a luxury compact coupe or convertible models. Production of the 228i xDrive started in 2013 at BMWs Leipzig, Germany plant. The 2-series designation comes from BMWs new model numbering system where models with even numbers are coupes and convertibles while models starting with odd numbers are sedans. Major parts that make your BMW 228i xDrive include suspension parts, engine mechanical parts, and drivetrain related parts. All BMWs rely heavily on their well-engineered suspensions. Suspension parts like control arms, ball joints, and shock absorbers are all critical when it comes to your BMW.

Generations of the BMW 228i xDrive

The F22 228i is available as a coupe model and is powered by either an N20B20A or N26B20A SULEV engine. In the United States the N20B20A engine produces 241 horsepower and 258 lb ft of torque via direct fuel injection and a single twin scroll turbocharger. The xDrive model became available in North America as a 2015 model year. It features BMWs all-wheel drive system known as xDrive.

FCP Euro has a wide variety of parts available for your 228i xDrive with a selection that increases by size every day. FCP Euro is dedicated to providing the best options for your 228i xDrive including Genuine, OEM, and only the highest quality aftermarket components. At FCP Euro we will not sell you parts that we wouldnt install on our own cars. Along with replacement suspension parts, engine mechanical parts, and clutch parts FCP Euro also carries an array of high quality performance parts intended to improve the handling and driving dynamics of your BMW 228i xDrive.