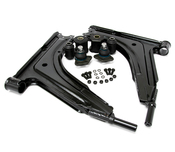 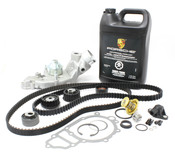 The Porsche 944 was originally a joint venture between VW and Porsche, but because of the expense of the program VW decided to hand over the entirety of the production to Porsche. The sports car was eventually built by Porsche from 1982 to 1991. It was built on the same platform as the 924, although 924 production continued only through 1988. The 944 was intended to last into the 1990s, but major revisions planned for a 944 ""S3"" model were eventually rolled into the 968 instead, which replaced the 944. The 944 was a successful model and was available as both a coupe and cabriolet in naturally aspirated and turbocharged forms.

FCP Euro offeres an enormous selection of Porsche 944 parts. We've got 944 Suspension kits, 944 Clutch kits, and all kinds of 944 brake kit options. So make sure to add you car the the garage and have a look around, we'll even tell you when a part properly fits your car. But if you ever have any questions you can call us directly at 1-860-388-9001 and speak to one of our ASE Certified staff. We're here to help and that's just what we want to do.