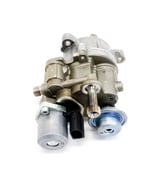 The BMW 1 Series M, also known as the 1M, was a specially produces model that borrowed heavily from the E9X M3 for suspension parts. It features cosmetic enhancements to the body including wider fender arches. In many respects the 1M is a minimalist and more traditional M car in regards to size and equipment available.

Generations of the 1-Series M

The E82 1M (2011) was only available as a 2011 model year car. It featured multiple improvements over a traditional E82 135i including a more powerful N54B30 engine, also known as the N54B30TO, producing 340 horsepower and 332 lb ft of torque in stock trim. The 1Ms suspension is borrowed predominantly from the E9X M3 including the solid forged aluminum control arms. The 1M was sold with a 6 speed manual only and featured a limited slip differential putting power to both wheels at the back. The body of the 1M also received numerous cosmetic enhancements including a wider track and an overall bigger feeling more muscular body. Despite the extra size of the 1M it weighs in 80 pounds lighter than a standard E82 135i coupe. The 1M was a limited production car and a total of 6309 cars were sold worldwide. The 1M is a highly sought after car for the performance enthusiast.

FCP Euro carries a wide array of replacement parts for the 1M. The 1M like any M engineered vehicle is heavily reliant upon its specially engineered suspension to deliver the driving characteristics that enthusiasts have come to expect from these special BWM cars. FCP Euro also carries a wide array of mechanical replacement parts including spark plugs, ignition coils, and anything else you will need to maintain your 1M. Along with the standard replacement parts needed to keep your 1M running its best FCP Euro also features a BMW OEM Index that allows you to search by part number to find the BMW part you need when you need it. FCP Euro carries an array of performance parts that allow you to upgrade the performance of your BMW 1M.