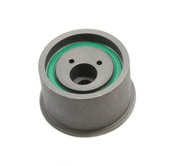 Audi’s central hub is located and operated from their German headquarters. Before they began their extended history of producing some of the best after luxury vehicles in the auto industry today, they narrowed in on creating innovative automobiles that have altered the auto market positively. Audi’s well-known logo represents their advanced and forward thinking engineering. Their branded philosophy, "Progress through Technology", encompasses their stance, which pushes their progression through of Audi vehicles and products, and more specifically, with their timing parts. Audi continuously motivates their team and clients through their engineering and designs that have become tantamount to the Audi brand. Your Audi timing belt controls the timing of just about every moving component in your engine. The main purpose is to coordinate the movement of the valve-train on the top of your Audi’s motor with the actions of the crankshaft on the bottom. Timing belts are not usually as strong as roller chains and while metal chains do stretch, they are not as stretchable as timing belts. Like most modern overhead cam, four-stroke engines, the Audi A4 engine was an interference engine. This means that through the running of the four strokes of your Audi’s engine, the piston takes up the same amount of space that valves take up at other times during the strokes. A vehicle running at 4,000 rpm would have to specifically and quickly time the movement of its cylinders and valves so they did not collide or interfere with each other. Timing belts and chains are particularly important in interference engines, including the Audi A4. For further information on your specific belt choice, the FCP Euro team is here to point you in the right direction. FCP Euro also has a range of Audi timing parts and components, including a vast selection for the Audi brand, as a whole.

Because your Audi A4 has an interference engine, if the timing belt breaks or slips, decoupling the timing of the crankshaft and camshaft, the pistons and valves will run into each other at a high speed with force. This will result in serious and tragic engine damage to your vehicle. If you are worried or concerned about your Audi’s timing belt, one solution is to swap it out right away, despite the initially suggested 90,000-mile service period. Get in touch with Audi or FCP for any other suggested replacements with updated parts. FCP Euro's experienced and motivated call center team is easily reachable and willing to help out with any support or questions you have. If you are in need of suggestions in order to find which timing part is paramount for your Audi, FCP has a large collection for the Audi brand. Check out FCP Euro’s website for all products, as well as our continuously updating inventory. If you have questions, would like to put in a phone order, or just have feedback, do not hesitate to give FCP Euro a call at 1-860-388-9001 to connect with our service friendly team.